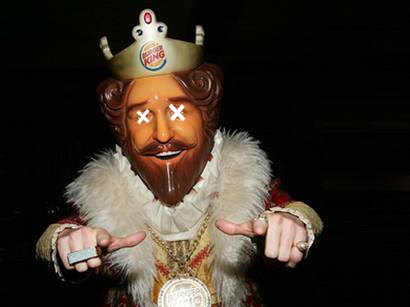 On the former partner of CP+B, Alex Bogusky’s blog , he communicates his thoughts on the recent CP+B and Burger King break up:

Perhaps the most frustrating times running an agency were those when you decided not to continue to move forward with one of your clients. This can happen in several ways. Sometimes the client decides they want to look at other options but claim to be committed to the relationship. In those cases, I usually chose to split up. So it’s sort of mutual although the client, oddly enough, often gets angry. In more specific cases, a client might actually call for a full-on review. I never chose to participate in those, although many agencies do and sometimes they retain the business. This probably works best in big networks where they can redesign themselves for the new client desires. Then there is the case when you have tried everything to make the work good and the relationship work, and it just isn’t going anywhere and most importantly it is killing your people.

We had a rule that worked well: if the partners no longer wanted to work on a piece of business then we felt like we could not ask other people to work on it. When you would hit that moment, you knew you needed to resign the account. This came with a feeling of failure, but also a responsibility to protect the agency culture. We resigned several accounts over the years but none bigger than Miller Brewing. And what a shit storm that was. The client was beyond angry, ballistic, and although we sent out a release explaining our decision they decided to claim they had fired us. Whatever. People are free to say whatever they need to, to keep their Board of Directors happy, I suppose. But what was frustrating and somewhat telling was the fact that the advertising trade press reported it that way, even though they knew the truth because they had been made privy to the decision prior to the announcement.

My sense is that this comes from a couple of places. First, the advertising press doesn’t know shit about the advertising business in that none of them has ever been in a senior job at a decent agency. Because of this, they are sure that all billing is created equal and they are confused by the idea that it is not. Second, there is a certain self-loathing that exists in this industry that is hard to quite understand. But it prevents the agencies from actually rallying around one another in the face of the mistruths reported to capture attention. In my career, I’ve seen the advertising trade press take the same ride toward sensationalism that most of the mainstream press has taken. It’s a shame.

When you work in the industry and head up an agency, you tend to have to shut up and take it. Just release some nice quote about “creative differences” and how you wish your former client all the best. Now, not so much. We fired Miller and it was a decision I’ll always be proud of for lots of reasons beyond the work. And my guess is that CPB decided it was time to part with BK. It might have been a mutual decision in the end but my hunch is that they had too much creative integrity to do the kind of work the new BK team was asking for. And I’m proud of them if that’s what went down.

Last week one of CP+B’s biggest clients, Burger King, decided to leave them and now, Groupon dumps CP+B after the Super Bowl fiasco with their commercials.

It is surprising that Groupon CEO Andrew Mason decided to switch sides and having been defending the Superbowl ads that CP+B produced. He is now blaming himself and CP+B for trusting them too much “ to be edgy, informative and entertaining, and [Groupon] turned off the part of [their] brain where [they] should have made [their] own decisions. [They] learned that you can’t rely on anyone else to control and maintain your own brand.”

The purpose of the ads were to take well-known causes and change the cause and the role of the celebrity spokesperson.

As described in AdAge , “the situation illustrates a classic tension in marketer-agency relationships: Clients say they want to take risks, but later realize they weren’t ready or can’t stomach the criticism associated with them. And CP&B is nothing if not a risk-taker, known for ads that reap miles of PR, even if they stir up controversy.”

For those who follow SID LEE , an advertising agency named 2009 and 2011 Agency of the Year by Marketing Magazine, they will be recruiting talent for a Commercial Creativity Boot Camp from May 30 to June 9, 2011. Successful applicants will be flown *for free* to SID LEE’s main headquarters in Montreal and will be tested among the best 8 creative talents in the world as they will be spending 10 days living and breathing Commercial Creativity. Check out SID LEE Collective Bootcamp on Facebook.

On another note, with Dell recently added to their client list, SID LEE will be opening their first U.S. office in Dell’s home town of Austin, Texas.

Found on their Facebook page, “ Sid Lee peeps are at SXSW this week and, guess what, some of them decided to never leave Austin. Stay tuned for more information but we are shopping for a creative space in the city. We will open shop in a few weeks.”

SID LEE has already posted up several job positions on their website such as Account Director and Senior Strategist.

They will be starting about 15 people at the new location and this marks the agency’s fifth office aside from its headquarters in Montreal, and offices in Amsterdam, Paris and Toronto.

Vito Piazza, general manager of Sid Lee Toronto says “ “Austin is a pretty incredible city,” Piazza said. “It has a very eclectic attitude culturally towards music and art. So while it’s great for us because Dell is a great piece of business and we want to be as close to them as possible to forge a deep relationship, we want it to be more than just a functional office [for the client]. It will be a breeding ground for Sid Lee and what we do.”

Hi, I'm Aaron and welcome to adverything , an outlet for my passion for advertising and everything related to it.

If you are interested in advertising with adverything or have any questions at all, feel free to contact me .

Adverything is a part of these blog communities: